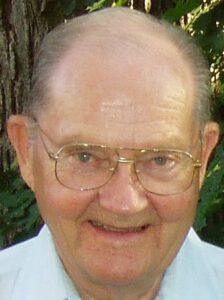 John died peacefully at Joseph Brant Hospital, Burlington, Ontario on Friday, December 28, 2018 at the age of 98, while recovering from a hip fracture and a peripheral arterial angioplasty.

John was born March 15, 1920 in Kitchener Ontario and started work there during the depression as a bank clerk at the age of 17. He was transferred to Montreal in 1941 and had a varied work career there that included accounting, real estate management, sales and appraisals, and mortgage insurance. He met Dorothy in 1942 at Lakeside in Pointe Claire, Quebec, and they were married in November, 1944. They lived and raised their three children in nearby Dorval, Quebec. John’s company transferred him to Toronto in 1972 as an assistant general manager. He retired in 1982. He and Dorothy enjoyed many years curling, golfing, travelling the world and spending time at the family cottage in the Laurentians. After retirement, John and Dorothy moved to Burlington, Ontario and enjoyed their condo-apartment life at 2055 Upper Middle Road, where they engaged in social activities, bridge, swimming and billiards with many neighbours and friends in their building. John and Dorothy continued their golfing at Pineland Greens in Millgrove.