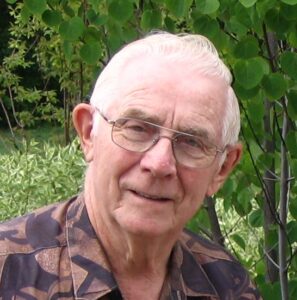 Education began at Red Hill on Mount Albion Rd and high school at Saltfleet (Grays & Hwy #8 then) with his sister Kay and his Aunt Christine. He started at McMaster and completed his Mechanical Engineering degree at Queens University in May 1949.

Work on the farm continued, so he switched careers earning his faculty of education in 1968 and worked as a high school teacher for the rest of his career.

In the late sixties, his family sold most of the farm. Next, he designed his forever home on Country Club. The barn was torn down and 88 was built in 1975 next to his mom & Kay’s house. Eventually all daughters & their families lived in a row (Jane, Cathy & Nancy) with Mary Jo down the street until 2018.

He loved to travel and went across Canada, US, Europe and the UK. His golf passion saw him play 72 holes a day in his 72nd year. A love of bridge and the stock market kept his mind sharp until the end.

Marg’s brush with cancer in the mid 70’s saw Dr. Joe emerge. He was a pioneer in natural medicine and home remedies that served himself & Marg well as they both led healthy lives until old age.