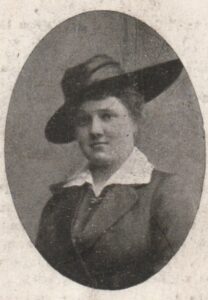 Julia was born in Etterbeek, Belgium on July 10, 1900.  She had lost her mother at the age of 7, and her only sister passed away when she was 19.  We never learned why she was traveling alone in France but she was.  While in France she got a ride from my Grandfather George who was in the Army.  He took her to the next town and dropped her off.  On his way back he stopped back in that town and was looking for her.  He found her being bugged by some army guys and he stepped in and said she was his girl.  He got her out of that area, and found that she was sick.  He tried to get her help but the Canadian army wouldn’t help, he went to the American army and they gave him medicine and told him to keep an eye on her.  Not sure how or why, but they married in LeHarve, France in 1920.  She took a boat to Canada and started her short life there with George. In 1921 George went to the United States to find work.  He found a job working for Henry Ford, at the Highland Park Plant.  He purchased a small house in Hazel Park, Michigan, and would become an American Citizen at this time.  They were blessed with three daughters, and lost one son at 3 months old in bed, probably sudden infant death.  The doctors warned her of a weakened heart from her sickness.  6 months after giving birth to my Mom, she would pass away at St. Mary’s hospital in Detroit, Michigan.  I never knew my Grandmother, but my Grandfather never stopped loving her.  We hear all the stories of her travels, and how she made Belgium lace, How she spoke 7 languages, how strong she was, and how gentle she was with her children.  She was unforgettable in my grandfather’s eyes, as he never remarried, he thought of her daily, and I’m sure she was his last thought when he passed.  My Grandfather buried her in Brantford, where she had friends, and in 1983 he joined her there with his son.