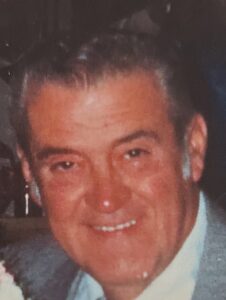 Born just prior to the Dirty 30s, Louis Michael Hurley was the youngest of five siblings, the son of Dennis Louis Hurley and Mary Lauretta Slattery. Growing up at 212 Chatham Street, he was a life-long resident of Brantford and never strayed far from his East Ward roots. With only a grade eight education, he was able to find good paying jobs on factory assembly-lines, enabling alcohol induced merriment with childhood cronies. It was during one of these escapades that his sister Gertrude introduced him to his future wife, Betty Helen Willson.
In 1955 he married at the newly constructed Our Lady of Assumption Roman Catholic church and found steady employment at Hussman’s Refrigeration during Brantford’s industrial heyday. In a little over a decade, he became the father of five children and changing responsibilities took a heavy toll, with his life significantly altered after a near-fatal heart attack at forty-three years old. Believing that he was living on borrowed time, he coped by turning to liquor but with the faithful devotion of a loyal wife, strong Catholic beliefs, and his considerable character, he was able to slay his innermost demons and walked away from this unnecessary turmoil.
Soon after turning sixty, he began welcoming the first of his eleven grandchildren, entertaining them with memorable antidotes and provocative opinions. Louis would never consider himself a saint, he took glee in off-colour observations, and had surprising insight about most world-problems. He enjoyed small-group conversations, like to dine at many of Brantford’s lesser known restaurants, and was proud of the life he scraped together from his humble roots.